Press release: In memory of our founder, Rev Paul Nicolson

Z2K is deeply saddened to hear of the death of our founder, Rev Paul Nicolson.  Paul was an absolutely tireless campaigner against the scourge of poverty in the UK, and especially against the recent cuts to Social Security benefits that have caused so much of it.

Firstly A GARGANTUAN THANK YOU to all who’ve posted such wonderful messages and who’ve generously given to Dad’s legacy fund.

Many years ago our lovely Dad circulated detailed plans for how he wanted us to organise his funeral. He wanted a communion service at St Paul the Apostle, and for his ashes to be buried in Tottenham, with the people he had served and loved for so many years. We had hoped to say goodbye to him in the company of the congregation of St Paul the Apostle, his extended family, and his many friends, colleagues and supporters.

He could not have predicted the Coronavirus outbreak would mean we will be unable to realise his wishes, but we feel sure that he would want us to take precautions to protect the most vulnerable. So it is with heavy hearts that we have to scale back our plans to the following;

On March 30th Dad will be in St. Paul the Apostle in Tottenham from 10:30 to 11:30 for local people to pay him their respects. Due to social distancing measures, the church is unable to allow more than 10 people in at a time, and so a system will be in place for limiting numbers. A Mass of the Angels led by Bishop Rob and Fr Staffan will follow. At 12:00 Dad will travel to the crematorium for a private service with just the family.

Not all is doom and gloom, however…

Later this year we are looking forward to holding a service of thanksgiving and celebration to which everyone will be invited! We hope it will be a great gathering to celebrate his extraordinary life through which the lives of so many others were changed for the better.

And we can all help spread the word.

Possibly the UK’s most social media-literate octogenarian, Dad was actively engaged with his supporters (and detractors) on social platforms, working with allies to improve the lives of those who are now most affected during this time of crisis. Therefore we feel it is fitting to give those not able to be with us at his funeral a voice via these channels.

And you can join us. Use your phone to write or record a short video message answering one or more of these questions:

– How should Rev Paul’s community respond to the current crisis?
– How will you follow in Rev Paul’s footsteps?
– How has Rev Paul touched your life?

On Monday 30th March post your text or video tagging Dad’s Facebook and Twitter handles (see below) with the hashtag #RevPaul. Dad requested that people give to Z2K and TAP rather than buy flowers or cards so please include the https://bitly.com/RevPaul link on all your posts.

We look forward to meeting you at the memorial later this year, hugging without reservation, and celebrating the life of our extraordinary father.

With huge thanks for your love and support,

Z2K is deeply saddened to hear of the death of our founder, Rev Paul Nicolson.  Paul was an absolutely tireless campaigner against the scourge of poverty in the UK, and especially against the recent cuts to Social Security benefits that have caused so much of it.

With like-minded friends, Paul founded the Zacchaeus 2000 Trust in the early-1990s to help some of those hit by Margaret Thatcher’s Poll Tax.  His pioneering work challenged local authorities to accept that many of their poorest residents were simply too poor to pay this tax, and ultimately contributed to the creation of Council Tax Benefit in 1993.

He later campaigned almost single-handedly against the “localisation” of Council Tax Benefit under the Coalition Government, helping to secure concessions in the House of Lords and encouraging us to challenge those London Boroughs that aimed to simply pass that cut on to their poorest residents.  At considerable personal cost, he also challenged his own local authority’s decision to start charging – a legal battle that eventually convinced a new generation of councillors to reinstate 100 per cent support.

Paul maintained a very close interest in Z2K’s work even after his retirement as our Executive Chairman.  He was incredibly supportive of all the new staff and Trustees that have followed in his wake and encouraging of our efforts to grow our services so we could help more low-income Londoners.  He was also successful in his own new organisation Taxpayers Against Poverty, which rightly sought to challenge the unthinking politics of austerity nationally and locally. 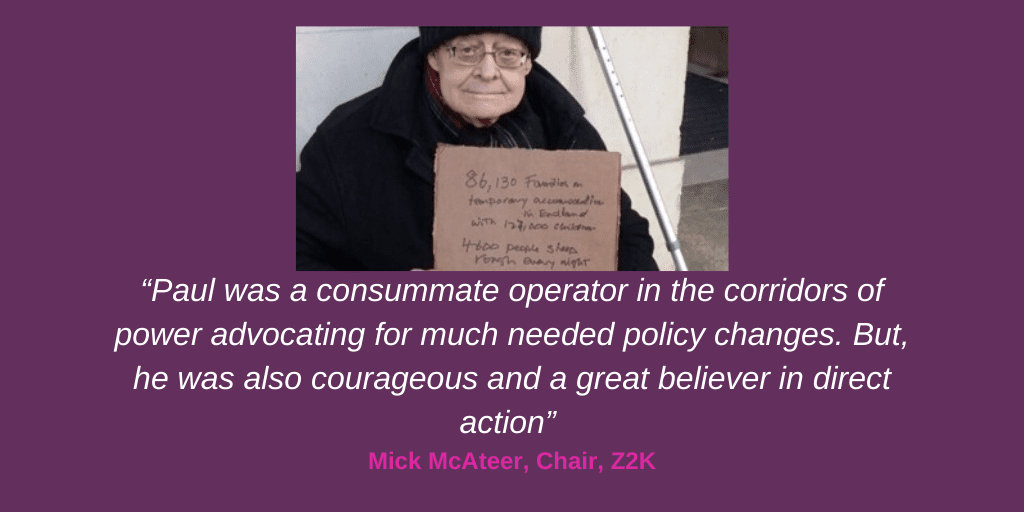 While Paul was renowned as a combative and even fierce campaigner, he was also one of the kindest of people personally, as the tributes from those who worked with him have shown.  He lived his faith in his campaigns for social justice. He was a consummate operator in the corridors of power advocating for much needed policy changes. But, he was also courageous and a great believer in direct action. He only cancelled a protest outside Downing Street last week because he had been admitted to hospital. He was willing to put his liberty at risk for causes he believed in as he showed in his protests against council tax.

We will miss him deeply in the years ahead, but will take inspiration from his life and work and honour him in the way we think he would have wanted – by renewing our own efforts to fight for a London that is free from poverty and homelessness, and perhaps a little kinder too.

Paul’s wishes was that, instead of flowers, well wishes should donate to his legacy fund.  We are honoured to be one of the recipients of this funding, and will use all donations to continue to fight poverty in Paul’s footsteps.

You can read the family’s statement on Taxpayers Against Poverty’s Facebook page here.